Congratulations, lucky owner of a Shovel Knight series amiibo! When the power of amiibo combines with the might of Shovel Knight, amazing things can happen!

Welcome to the world of amiibo in Shovel Knight! Congratulations, lucky owner of a Shovel Knight series amiibo! When the power of amiibo combines with the might of Shovel Knight, amazing things can happen!

First, you may speak to Madame Meeber to access new costumes to wear and fairy friends to accompany you! Second, there’s the ability to play as a Custom Knight, a version of the Blue Burrower that can be augmented and modified to your heart’s content! Finally, new challenge levels  await, each of them making use of your enhanced abilities!

If you want to read about a different game or feature, go to the main Shovel Knight: Treasure Trove manuals page.

The affable conjurer Madame Meeber can be found in every Shovel Knight game! Find her in the Village, Potionarium, the Glidewing, and even the Tower of Fate! If you speak with her and scan your Shovel Knight series amiibo, she will summon a flying friend or new costume for you!

Just speak with Madame Meeber to get started. If it’s your first time summoning a fairy, choose “scan amiibo”. From then on, you can just choose “summon” to summon that fairy. Your Fairy friend will accompany you wherever you go! Fairies are just for fun and don’t confer any gameplay benefits. But things sure are less lonely with a flying friend around!

If you want to dismiss your pal, just choose “dismiss”.

Tip: You’ll need to summon your fairy each time you turn on the game.

If you want to change back to your default costume, simple speak with Madame Meeber again.

Tip: You can also change your costume at each game’s Armor Smith!

What is Custom Knight? It’s a new way to play Shovel Knight: Shovel of Hope! Instead of earning upgrades from Chester or purchasing them in the village, you will automatically unlock upgrades when your Shovel Knight amiibo levels up. These upgrades range from visual flair to all-new relics. Let’s dig in and take a look!

On the Profile Select or Level Map screen, press the button to bring up the amiibo scan menu. When the menu appears, scan your Shovel Knight amiibo by tapping it to your console’s NFC Reader/Writer. 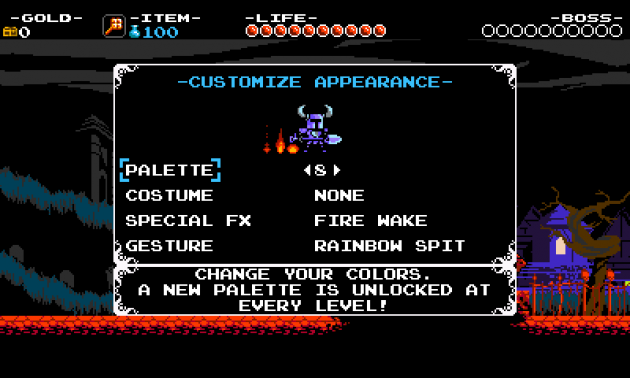 Once scanned, choose to set P1 or P2 as a Custom Knight (Player 2 only available on Wii U/Switch)! Now you are ready to choose a profile and get going! 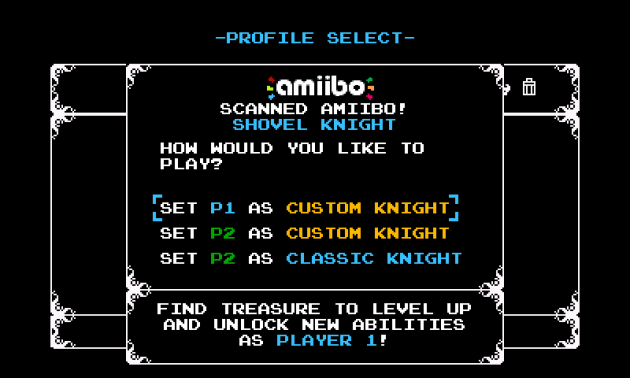 TIP: Custom Knight is only supported in Shovel of Hope.

Your Custom Knight will level up as you earn gold, all the way up to level 50. Even if your co-op partner grabs the gold during play, it will still count toward your total. You can see your level progress on the Custom Knight Edit Screen.

When you level up, you will earn a new upgrade, and a message will appear to let you know. The upgrades are somewhat randomized, so you never know what you are going to get! But don’t worry – by the time you are level 50, you will have everything. 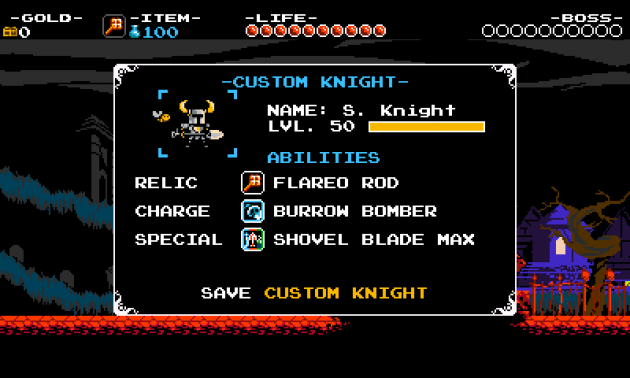 The name of your Shovel Knight amiibo.

Your current level. The blue bar shows your progress to the next level. It takes more and more gold to reach each new level, so keep at it!

This shows what your Custom Knight looks like. Choose this option to customize your Shovel Knight to look amazing!

Choose this to save your progress to your amiibo.

Choose the Shovel Knight avatar to edit your appearance.

You earn a new color palette for every level you gain! Stylin’. 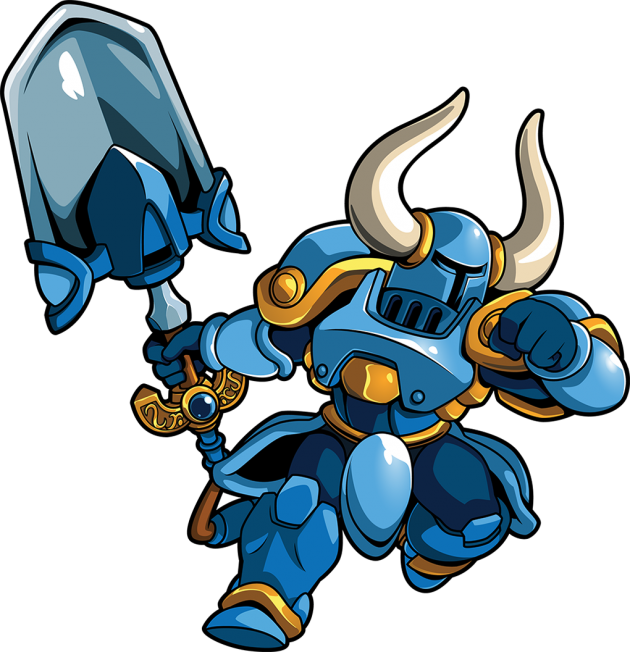 Whoa, nice armor! Costumes can completely change the look of Shovel Knight! When you change your costume in the field, the change will not be shown until you fall in battle, complete the level, or return to the level map.

If you want to kick up a cool trail or maybe befriend a floating companion, you’ll love Special FX!

Hold down on the +Control Pad to perform a move with attitude! 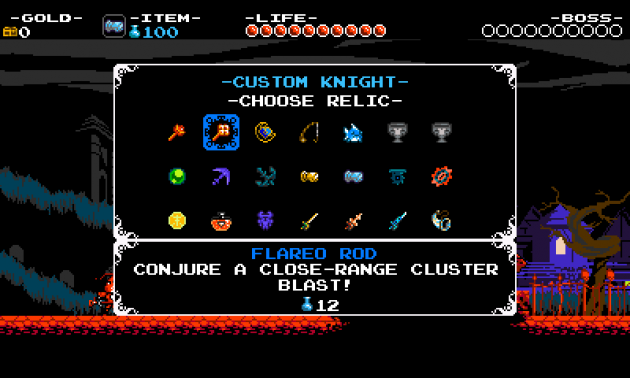 As a Custom Knight, you can earn all of Shovel Knight’s original Relics. However, there is a slew of amazing new Relics! Like the original Relics, you can use the Touch Screen or the GamePad to quickly choose a new loadout. Get equipped!

Toss into a sparkling pit and see what flies up! Just like Plague Knight!

Swing a massive anchor into the air and hold on tight!

Throw this projectile to cut through enemies around you! The boomerang alternates paths with each toss.

Creates a shadow that fights and follows your every move! The Shadow Knight attacks instead of Shovel Knight, giving you enhanced reach.

Rise high into the air, skewering enemies in your way!

Soar through the air until something blocks your path!

Hold Y to charge up until you flash, then unleash these moves!

Hold attack and release to unleash a diving forward attack. You can also do this while jumping in the air.

Hold attack and release to crash to the ground with flames. Great for clearing enemies beneath you.

Hold attack and release to explode through the air. Just like Plague Knight!

Hold attack and release to dash through danger without taking damage! You can use this to skip right past hazardous areas.

Hold attack and release to absorb nearby treasure.

Special Moves are a grab bag of fun. Try them all out and see what Custom Knight combination works best for you!

Double tap in a direction to sprint.

Longing for your original Shovel Blade? Fully upgrade your trusty weapon with the Charge Handle, Trench Blade, and Drop spark. Note that if you have a Charge Move equipped, the Charge Handle will be disabled.

Float slowly to the ground by holding jump.

Gain extra height by jumping again in the air.

Your Shovel drop now descends at an angle. Weird!

Care to master your new custom moves or your teamwork? New challenge levels await you! From the Challenge Mode menu, press the button to open the amiibo scan menu. Scan your amiibo by tapping it to your console’s NFC Reader/Writer. This will unlock the new Challenge Levels!

Co-op Challenges (available only on Switch and Wii U) will challenge you and a friend to work perfectly in tandem to get through. Can you beat them all?

Note: Haven’t unlocked Challenge Mode? You need to complete at least one game first! Although, there may be a secret way to unlock Challenge Mode...