What’s up, design devotees? With King of Cards’ one-year anniversary right around the corner, we thought it would be festive to finally tell the tale of how Joustus came to be!

What’s up, design devotees? With King of Cards’ one-year anniversary right around the corner, we thought it would be festive to finally tell the tale of how Joustus came to be!

In part 1 of our design article, we’ll be talking about how we conceived of Joustus, and why!

The first Joustus prototype, known at the time as "Cardurr"

You might be asking yourself, “Why did Yacht Club Games add a card game into their platform game?” Well, the answer to this question is simple- like many of our ideas, Joustus started as a joke.

Since Shovel Knight: King of Cards was the 4th game in Shovel Knight: Treasure Trove, we wanted to do something different after developing platformers for so long. If Plague Knight was the romance and Specter Knight was macabre and cool, then King Knight would be a wacky farce with a strange and fanciful addition – a collectible card game. “Wouldn’t it be funny if King Knight’s campaign had….. a card game!?”

This wildly unexpected idea was invigorating!

Writing Checks We Can Hopefully Cash

At the Yacht Club, we often like to write “story checks” that we have to cash at a later date. For instance, Specter Knight discovers that his beloved Phase Locket is missing at the end of Plague of Shadows, angrily destroying his hiding spot. The truth is, at that time we had no idea what significance the locket would play in the story. Later on, we built the story around the phase locket. Boom! Check cashed.

The King Knight boss battle in Specter of Torment features cards with arrows (pictured above), but Joustus was only a prototype and the card shapes are all wrong!

When the time finally came to develop King of Cards, we were already thinking about cards. We knew a card game would be somehow incorporated into the main game, but there wasn’t much gameplay or structure behind that initial idea.

To give ourselves more of a knowledge base, we set to work researching card games and board games of all types! We attempted to distill what we loved about video game card games, and to find inspiration from other sources, too.

Triple Triad is an optional card game that’s played throughout Final Fantasy VIII. By challenging NPC characters, you can play a quick round of a simple card game played on a 3×3 grid. It’s more like Tic Tac Toe than Chess. Winning earns you new cards, which can later be used as resources to help your adventure. Triple Triad is a nice diversion in between battles, plus it’s fun to participate in a fad with all of your RPG pals. Many of the core tenets of Joustus began with Triple Triad as a launching point, and we’ll get into those specifics later. 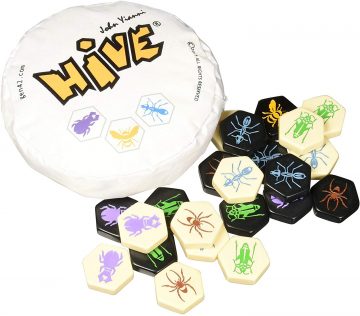 We sampled dozens of real-life board, card, and card-themed video games during our reoccurring game nights. Forever in pursuit of simplicity, we were drawn toward tactile games that utilized physical positioning like Tic-Tac-Toe and Dominoes. We discovered Hive, a game that combined elements of dominoes, checkers, and chess. In many of these games, you jumped over your opponent’s pieces, block them with your own pieces, or pushed them around to gain an advantage.

Finally, we gathered intelligence by playing collectible card games like Magic: The Gathering and the Pokémon TCG (Trading Card Game). We marveled at their impressive variety and scope, vast disparity between card abilities, and tantalizing foil and rare cards. It’s fun to build a deck and complete a set!

We prioritized simplicity. Role-playing games and TGCs often had tons of parts, tokens, steps, and math! While we enjoy delving into deep systems sometimes, we wanted Joustus to be a diversion from hit points, mana, and attack/defense numbers. Instead, we focused on deriving complexity and fun from positioning on the game board, more like a platforming game than a role-playing game.

Even if we made the best card game in the world, that’s not what we promised a Shovel Knight game to be. So though we worked to make a great card game, we made sure that players wouldn’t be forced to play Joustus. After all:

We decided that you’d be able to finish the campaign without playing a single card game – not even once! Players only very rarely earn cards during platforming gameplay, too.

Initially, we weren’t sure of Joustus’ scope compared to King of Cards overall. That meant that our card game had to be both super simple (if it needed to be), and super scalable, too, if we decided to expand the scope later. Joustus needed to support a small default deck, while at the same time, support many unique cards. If we wanted to suddenly have more complex mechanics, we’d need a way to add them!

We proceeded by divorcing the two gameplay types, then connecting them nearer to the end of development. Basically, the card game’s scope was at the whim of the platform game’s development. Just one of the fun challenges of making a game within a game!

Alec Faulkner (Designer) and Morgan Guyer (Concept/Illustration) playtesting back in February of 2016!

Back in our day when WE went to game design school, we used paper prototypes to prove out gameplay concepts, and we liked it! (Do they still do that anymore…? Let us know down in the comments!) Either way, it’s usually faster to scribble something down on paper and play it than to develop software. We set to work making some tactile board pieces to push around and play with – not being totally sure what they’d do.

We started by making square cards with arrows on the sides. We knew we wanted to avoid math and counting, so we used symbols instead. These arrows could be used to compare cards, symbolize movement in a direction, or.. something! From there, it was easy to extrapolate a small but complete ‘deck’ of pieces that had no repeating arrow configurations. We made 2 symmetrical decks from these arrows- an ‘X’ deck and an ‘O’ deck.

3x3 Joustus board with 3 Gems and surrounding Graveyard tiles.

When we first started playing with the arrows on a gridded 3×3 board (Triple Triad showed us the utility of a small 3×3 board), it was natural to slide them around. The arrows provided a direction to slide and the opposing arrows a blocking spot. With these mechanics in play, we needed a goal. Since gameplay was centered around pushing and being pushed, the goal then became to stay put in one spot! An unmoving gem on a tile was made to denote the goal spot – you would need to have a card covering the Gem (or Gems) to win. The game would be over when there were no more valid positions to place a card.

The second Cardurr prototype had much nicer graphics!

At this point, we developed some more rules:

From that point, the core gameplay was set. During this phase, we also prototyped many other cards like a “lock” card that could not be pushed. Some of these additions, modifiers, and embellishments later ended up in the final game.

Next Time: Fleshing Out Joustus

That’s it for part 1! Next time, we’ll talk about how we developed and digitally fleshed out Joustus into a full game within King of Cards. Stay tuned, loyal card-carriers!